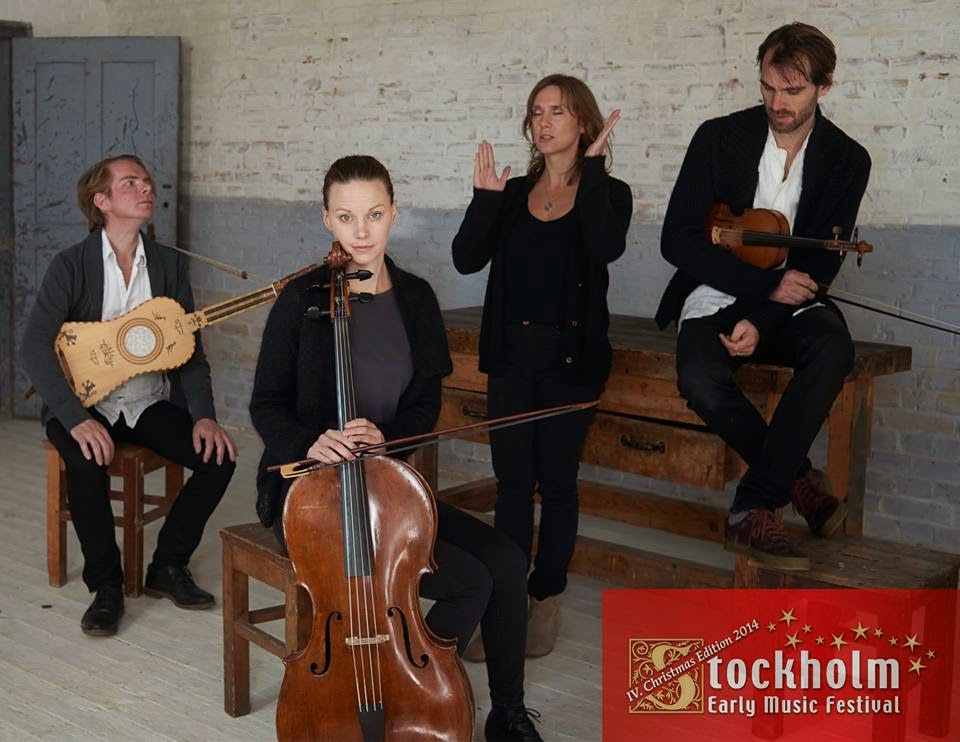 
Back again in the bloggy world :) I´m pleased to present once more the Nordic countries' largest festival for historical music, for the 13th year running. The highlight of the season for the lover of early music. It's time to enjoy those longed-for, bright summer days, filled with live music, in the historical setting of Stockholm's Old Town.

As for the music and the artists - international is the word. SEMF 2014 presents 25 concerts with more than 70 artists from 10 countries!! A brilliant festival opening is anticipated with L'Arpeggiata, currently one of the most sought-after ensembles in Europe. In an exclusive world premiere, SEMF and Sweden will play host to the viola organista of Leonardo da Vinci, reconstructed by the Polish musician Slawomir Zubrzycki after a 500-year wait as a blueprint. A unique opportunity not to be missed!


Experience the beautiful sound of French vocal ensemble Gilles Binchois, and join Joshua Rifkin in his poetic interpretations of J. S. Bach's cantatas. May we tempt you with dazzling Corsican polyphony or a medieval French classic, the Roman de la Rose? The grand final of SEMF 2014 will take us to renaissance Venice and the Gabrieli brothers under the direction of well-renowned wind ensemble Concerto Palatino, surrounded by excellent singers.


A special thank you this year to the Swedish Arts Council for bringing out Stockholm Early Music Festival as an "event of national interest". It's never too late for... well, you know. Slogan or self-fulfilling prophecy? The sounds of the old masters are there for all ears. And that does good. Welcome!

On spring, multitasking, and mountains

In spite of the occasional snowfall, it feels as though we can finally say it with confidence: spring has come to Stockholm. Nothing seems as warm and light as the first days of sunshine.

But it's not only outside that we feel summer approaching. Inside the tiny festival office, the to-do-lists are, once again, suddenly becoming twice as long. From programming details and and schedules to PR decisions and newsletters, from layout feedback and programme notes to tax forms and statistics. As the list grows, so does an almost imperceptible feeling of expectation. Though sometimes partially obscured by massive piles of paper, it's there - a knowledge that we'll soon see this year's ideas and plans materialize during a vibrant, intense week.

To be sure, multitasking and seeming mountains of paperwork can be a little overwhelming - which is why it's not a bad thing to get to climb a real mountain from time to time. Last weekend, in Alsace, on a conference with REMA, the European network for early music festivals, we took the opportunity. An early morning, clear air, silence, and a mountain. Steep paths that posed quite a different challenge to our everyday mental climbing. But a view from the top somehow similar to the feeling of standing ovations after a concert.

We're getting closer to the festival! Run the final stretch with us - it starts now. 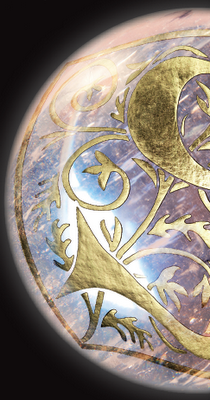 SEMF is getting ready to launch the spring season 2012 with the concert series Early Music LIVE!

After the Christmas Edition's much appreciated Early Late Night Concert, this spring's series presents three cozy concerts with a nocturnal touch. Once again the audience will have the opportunity of leaning comfortably back on a mattress or in a sofa with live early music right next to them!

Looking forward to continuing the Early Late Night Concert adventure and hoping to see you there!
/the SEMF team
Posted by Stockholm Early Music Festival at Monday, February 13, 2012 No comments:

Before beginning to write about all the things going on for 2012, SEMF would like to warmly thank all listeners, volunteers, participants, sponsors and friends who followed and supported the festival's activities in 2011!

The 2011 festival was a musical adventure spanning from Icelandic sagas to Bach evergreens – in between there was time for renaissance polyphony, French troubadour songs, wilful viol harmonies, a mad maestro di capella, vocal and instrumental jokes, Spanish baroque dances, thousand-year-old Persian music, and a singing wishing-well. The Early Music LIVE concerts presented bird-watching adventures as well as legendary castrato repertoire. The first concert of the series’ fourth season was also part of the opening festival of the new concert hall Musikaliska at Nybrokajen 11 in Stockholm.

Another adventure was the very first SEMF Christmas Edition, which was held on 3 December at Musikaliska. This was also the premiere of SEMF’s Early Late Night Concert – late evening concerts where the audience could lean comfortably back in armchairs or on mattresses and enjoy early music by candlelight. A much-appreciated concept that will appear in the programme again!

With a wonderful, eventful anniversary year ended, we now look forward to a new year of early music experiences. Preparations for the spring season and for this year’s festival, which will take place 6-10 June, are in full swing. Keep an eye out for news here on our blog and on www.semf.se! You can also follow the festival’s work on Facebook and Twitter.

Early Late Night in the beginning of December!

While early music concerts nowadays are often high-profile events held in large concert halls and churches, it has not always been like that. Back in the day, this popular music of its time was also performed at home for leisure, and at private parties and balls to entertain and delight guests who were eating, drinking and relaxing.
From this point of view, it is doubtful whether the new trend of late night concerts, where the audience can enjoy not only a high qualíty performance, but also a cosy place to sit or even lie down, is that much new. Could we call it ”back to basics” perhaps?
Nevertheless, the trend successfully started few years ago and evening concerts with a new level of cosiness, have been held successfully in, for instance, New York and Berlin ... and now, it is Stockholm's turn!
SEMF, in keeping with its traditions, is at the forefront of new concepts. Can you imagine one of the rooms in the concert hall Musikaliska becoming your livingroom for a night, where you can sit or lie comfortably back in armchairs or on mattresses and let a fascinating live performance of baroque music carry you through time?! 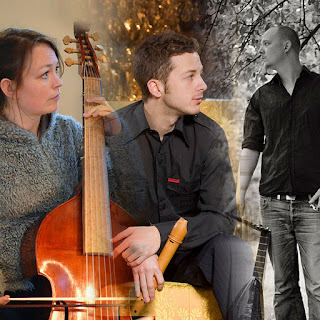 With the support from talented Swedish musicians Per Gross, Nora Roll and Anders Ericson, who are more than eager to try new ways of presenting the early music heritage, everything is set up for an amazing and warm ending to our magical Early Christmas celebrations on December the 3rd! An unforgettable experience!
So, don’t sit too long at the baroque buffet table… better hurry up to take a mattress in the front row ;)!
Merry Early Christmas!
With warm wishes,
The SEMF team.
Posted by Stockholm Early Music Festival at Thursday, December 01, 2011 No comments:

SEMF gets presidency in REMA! 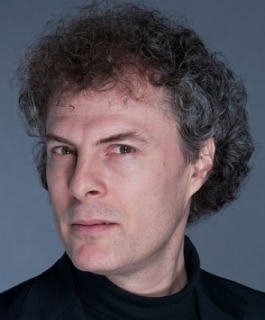 From now on SEMF has a presidency post in a European cultural organization. Until April of 2013 I will be a chairman of REMA, the European Early Music Network.

This is very nice for us, but also an important thing for Sweden´s cultural sector and early music life. We need to be more involved in what's happening in Europe, and Europeans might perhaps gain something from Swedish diplomacy and structured thinking... There are many areas where early music can play a stronger part, in everyday life, in the health sector, in PR - everywhere imaginable, really. It is also important in the current economic political climate to make a stand for the role of culture in society  in Europe. My hope is that my coming year will be full of positive energy for REMA and for early music. 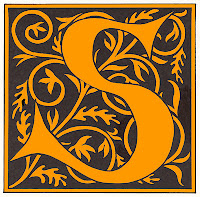 Now it is time to say a big HELLO to the all of the blogger society, our old friends and hopefully lots of new friends!
Writing the first blog post is very thrilling, I should admit. What is even more thrilling is the fantastical meaning of such an event! We are promoting early music, music that comes to us through centuries, by using modern social media tools! How great is that?!

SEMF is the largest and brightest early music festival in Sweden with 10 years of experience and a large amount of local and international audience, world-renowned performers as our guests. Nevertheless, we are striving to reach even higher points and thinking outside of the box in order to turn early music into a lively part of today!


Here we will write about all that is going on in between the festival seasons (we are an "early summer" festival and SEMF 2012 is scheduled for 6-10th of June) and, when the time comes closer, about our amazing everyday festival routine!
From now on, everyone is WELCOME to join the world of early music with Stockholm Early Music Festival!

Stockholm Early Music Festival
Stockholm Early Music Festival is the largest international event for early music in Sweden. Every year SEMF attracts thousands of classical music lovers to Stockholm and offer them an opportunity of experiencing the magnificent music from medieval, baroque and renaissance times in a unique atmosphere. Inviting renowned Swedish musicians as well as acclaimed international guest artists and introducing new concepts every year, we constantly grow and make the early music repertoire a living part of our time. We would like to invite even more people to join us for the celebrations in June 2012!